Greetings from the future!

Let me start by saying, if I never see a staircase again, it’ll be too soon. If ice were available to me, which it is not, and a bath tub, also not available to me, I’d make an ice bath and immerse me my lower body in it.

This is the aftermath of ascending the estimated 6,660 steps to the top of Mount Tai (Taishan), located in Tai’an city in Shandong province. I learned that “shan” means mountain, so though it’s more commonly called Mount Taishan in English, that’s redundant, like saying Mount Tai mountain.

Travel writing is awash with superlatives. Every site you visit will be either the biggest, oldest, longest, deepest, highest or most something. It’s these qualifications that make places worth visiting, after all. When it comes to Mount Tai, it is the most sacred and most famous of the sacred mountains in China. Here is a description containing another “most” from the United Nations Educational, Scientific and Cultural Organization:

Settled by humans as early as the Neolithic (a Dawenkou site is nearby), the mountain has been worshipped continuously throughout the last three millennia. The mountain was an important object of the cult worship of mountains even before 219 BCE, when the Qin Emperor, Huang Di, paid tribute to the mountain in the Fengshan sacrifices to inform the gods of his success in unifying all of China. On the mountain there are 12 historically recorded imperial ceremonies in homage to Heaven and Earth, about 1,800 stone tablets and inscriptions, and 22 temples, which together make Mount Taishan the most important monument in China, a world-renowned treasure house of history and culture.

I’ll add another superlative to the commentary: Mount Tai stands out as the religious pilgrimage with the most butt-kicking lower body workout.

Sure, it’s a tough climb up those nearly 7,000 stairs, but we weren’t in it alone. We struggled along with hundreds of other pilgrims, mostly Chinese, to reach the temples at the top. As I climbed step after step, I marveled at the sights around me: forests thick with evergreens, hawks soaring overhead, tree branches adorned with red ribbons, and perhaps most notably … the startling footwear selection of my fellow climbers.

What are some of these people thinking? Chris and I, like typical American tourists, are fully outfitted in athletic apparel. And I might add, appropriately so. This is no stroll around the block. Yet, many around me are dressed like they came directly from the office and, in some cases, like they’re planning on hitting the dance floor directly after their climb. Maybe they know something about what awaits us at the top that I don’t?

Let’s just say, it’s a humbling experience. Here I am, sucking wind and dripping in sweat, and just then a teenage girl saunters by, perfect hair and heeled boots clicking, as if she could have just as easily been on her way to H&M at the mall but instead decided to make the 3-4 hour climb up Mount Tai. And don’t even get me started on the little old ladies and men out here with us. Whatever their secret is to longevity, we need to figure it out in the West.

I will say that everyone was using walking canes. Chris and I could have purchased a cane or picked one up for free at the hostel, but we didn’t think they would be that helpful. I guess we were wrong.

All said, it took Chris and me nearly three hours to climb up the mountain, which includes time spent checking out the many temples lining the mountainside along our ascent. Once on top, the views were breathtaking and the temples awe-inspiring. We watched as women chanted and people lofted joss sticks and other offerings into a blazing fire pit. 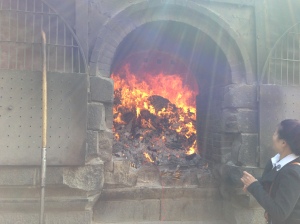 Though my legs are still in pain, and I have to walk down stairs backwards for the time being, the reward of the view from the top was well worth the climb. My favorite moment of the day occurred on top of Mount Tai while Chris and I gnawed on a cob of corn on a stick … an elderly man approached us, and as we prepared to be asked to pose in a photo with him, as is a common occurrence for laowai (foreigners), he surprised us by saying, “Hello, I am from Taiwan. I am a foreigner too. Here we are brothers.”

Here are our photos from Mount Tai: