Greetings from the future, dear readers!

Descriptions of Beijing are rarely complete without an adjective pointing to size.   “Big,” “very big”, and “huge,” would be appropriate, but many of you at home, in the present, may not be aware of what kind of “super huge,” we are seeking to describe.  China’s capital is large in both population, boasting somewhere north of 20 million people, as well as area.  Walking around most of Beijing (with some exceptions) is a decidedly tamer experience than Manhattan.  Those of you who have travelled to Jacksonville, Florida (the largest city by area in the continental United States) will understand the experience of a 2 hour drive beginning and ending in the same city.

Our trip to The Great Wall of China involved a three hour trip on a bus to Jinshanling from our hostel, one mile north of the Forbidden City.  Jinshanling is in Beijing, on the border of Hebei Province.  The Wall was initially built to keep out the Mongolians, who previously controlled what is now Northern Hebei Province as well as the currrent Chinese province of Inner Mongolia.

There are several places to view The Great Wall near Beijing, with Badaling being the easiest to access and thereby the most popular.  While I was averse to the extra time and money needed to get to Jinshanling, the experience of walking on the Great Wall without thousands of other tourists was well worth it. 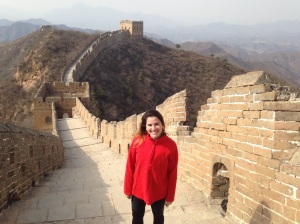 We hiked about four miles in total, from Jinshanling to our pickup point at Simatai.  The above picture shows Maria sporting a red sweater given to her by my Grandmother.  The red sweater, which is a color revered in China, got a lot favorable comments from the locals on the Wall.

We will have more videos moving forward, as we slowly, but surely, figure out how to use iMovie.

For now though, we’re off to have breakfast.

Have a good night!

Here are some more photos from the Wall …