Greetings from the future, dear friends!

Here, in the north capital of the middle kingdom, we await your tomorrow.  Coffee’s in the pot, a bottle of wine at the ready, and  Dwight Yokum, Dolly Parton and Notorious B.I.G. are playing on speakers that project throughout the restaurant and echo across the street.

That doesn’t work?  Do you have an iPod?  Nevermind, we’ll take requests.

Get comfortable, tell your friends, and have some spaghetti, why don’t you?

Or … don’t.  We’ll tell everyone to stop immediately!

The rise of the Chinese economy has created an environment which initially courted foreign investment, later manpower and now, tourism.  A 2013 HSBC survey of 7000 expatriates ranked China as the number one foreign location to live and work.  This ranks ahead of Singapore (a former British Colony) and Germany.

Recognizing the gulf of language and culture between China and the west, one might ask how the hospitality industry in China is courting the interests of western clientel.  On the high-end, this translates to luxury cars, polo, scuba diving on Hainan island, upscale nightlife and golf.  The answer to the traveler who is a bit lower-to-the ground: the western coffee shop.

The Chinese have paid that 12-hour head-start on the Eastern Daylight Timezone toward building an interesting welcome mat.  “Western coffee shops” are ubiquitous in areas with youth hostels and are visible throughout the country.  Wiggly Jiggly’s, next door to our current abode, boasts upholstered furniture, does not allow smoking before 4pm and was bizarely playing Christian music this morning.

Dolly Parton serves as an interesting backdrop for one attempting to pantomime “Tabasco sauce” to accompany their “American Breakfast.”

Western coffee shops have on offer WIFI, coffee, beer, wine, ice cream and … spaghetti.   A sort of faux French bistro coupled with an expat bar that generally offeres a better WIFI connection than the hostel across the street.  While a 25 yuan cup of coffee might be more costly than the price of a hearty breakfast of baozi, we will undoubtedly pay that tax from time to time in order to reach our dear readers. 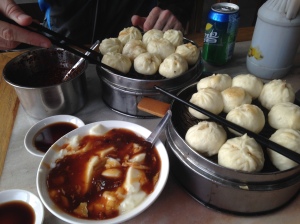 This full Beijing breakfast for two of baozi and bean curd soup cost only 19 yuan. 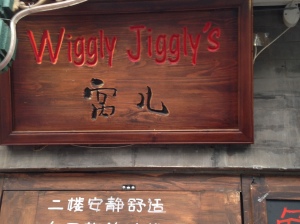 That said, I’m heading to bed.